Recently, Paques has split up the organization in several Operating Companies and a Global Team. 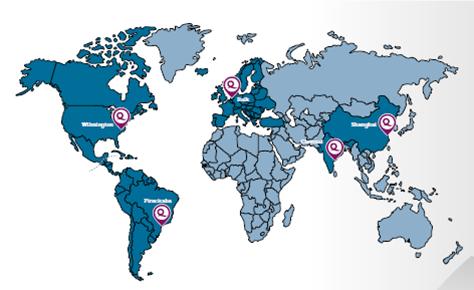 Each of these operating companies has a different market situation: Europe is in a mature market with more and more servicing and replacements of existing plants. In China, waste water management is developing fast due to legislation and enforcement, which is the same in South America. Paques India, that just started up, introduces the highly efficient Paques products in the region. Indian companies show big interest in these products and with its own production later this year, Paques India will have opportunities to make it economically feasible for customers in India to install Paques products. The North American OpCo of Paques finds itself in a start-up fase. Market and legislation rules are promising, but the Northern American low energy costs do not always make it economically interesting for the industry to invest in high rate solutions. Paques is developing a new Opco in South East Asia, which for the present will be operated from Kuala Lumpur in Malaysia. For regions like Africa and the Middle East Paques develops sales teams, that will operate from local sales offices or from the global office in the Netherlands.

Paques’ Global Team supports all these market developments and is responsible for the follow-up on market requests from all over the world. Next to that the Research Department in the Netherlands works closely together with universities in developing solutions for new technological challenges. Paques has grown to a World Wide Company with world class products and dedicated staff in all regions. That makes Paques a good company to team up with each global operating organization in every market segment.